On March 6, the 2010 Annual Meeting of China Hotel Industry and 10th China Hotel Forum and China Hotel Industry Golden Horse Awards Ceremony were held at the Shangri-La Hotel in Guangzhou. In view of Wanda Hotel Investment & Development Co., Ltd's outstanding contributions to promote the tourism and hotel industry in China, the organizer presented the Company the "Meritorious Enterprise for Promoting the Development of the Industry" award. The Company's General Manager Wang Xinqi and Deputy General Manager Shen Feng attended the ceremony on the behalf of the Company and received the "China Hotel Golden Horse" award medal, which is the symbol of the tourism and hotel industry's highest honor. 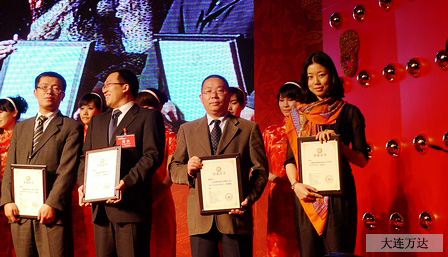 It was reported that, with the support and guidance of the World Tourism Organization, the China Federation of Industries and the relevant national ministries and commissions, the 2010 Annual Meeting of China Hotel Industry was jointly organized by the Asia Pacific Hotel Association, the China Hotel Magazine and the Tourism Research Centre of the Chinese Academy of Social Sciences. About 1,000 people attended the event, including distinguished representatives from the financial sector, real estate sector, media sector, etc., as well as chairmen and general managers of more than 500 domestic and foreign well-known hotel & catering groups such as InterContinental Hotels Group, Marriott International Group, Starwood Hotels and Resorts International Holdings, Jin Jiang International Hotels Group, Guangdong International Hotel Group, etc. Dalian Wanda Commercial Properties Co., Ltd and Wanda Hotel Investment & Development Co., Ltd were also well represented. All of the above had contributed to the development of the hotel industry. The participants carried out in-depth and warm discussions and exchanges with regard to the status and trends of the hotel and catering industry.

Wanda Hotel Investment & Development Co., Ltd is the largest investor in five-star hotels investment company in China and . It has opened and is operatinoperatesg seven five-star and super five-star hotels currently. It expects to have will open and operate 715 new five-star and six-star hotels in operation byin 2010 and 45 ones in operation by. By 2012, , it plans to operate 45 five-star and six-star hotels, thus becoming the world's leading hotel investment company. As China's only dedicated team to invest in the construction of hotels, Wanda Hotel Investment & Development Co., Ltd is able to independently fulfil the investment, design and construction of five-star hotels. The Company has also established strategic partnerships with the world's top hotel management groups such as Hyatt, Hilton, Accor, Starwood, InterContinental, etc.