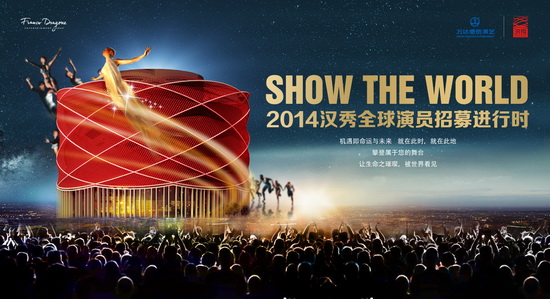 The Han Show, a joint venture between the Wanda Group and the Franco Dragone Entertainment Group that aims to create a world-class stage show in Hubei province's Wuhan, recently began its global talent recruitment drive. The aim of the drive is to attract the world's leading theatrical performers in areas such as acrobatics, singing, dancing, synchronized swimming, diving and much more. All individuals wishing to take part in this milestone event can visit our official Han Show   website（http://www.thehanshow.com）to submit their information and learn about the most current recruitment information.

The Han Show, which will be led by world-renowned Art Director Franco Dragone, will fuse modern performing arts together with ancient Chu and Han cultures to create a one of a kind theatrical extravaganza.  The show will be the first in the world to adopt cutting edge tools to enhance audiovisuals such as giant elevated screens, moveable rotating audience seats and more, with the sole intention of creating a 360-degree experience that completely shocks the senses.